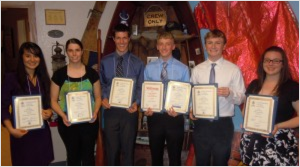 Brijonnay Madrigal is an outstanding student at the Jackson High School and the Ocean Research College Academy, a Running Start program at Everett Community College. In the summer of 2011 she was one of twelve US students selected to participate in NOAA’s Ocean for Life program in Santa Barbara California where she experience a two week immersion in marine science. She is the recipient of our $5,000 scholarship sponsored by theSeattle/Pacific Northwest Chapter of Council of American Master Mariners. She will be pursuing a career in marine biology with the goal of achieving an advanced degree in marine science. Upon graduation from ORCA, she will major in marine biology and communications at University of Hawaii Manoa in Honolulu.

Joëlle Blais, the recipient of our $3,000 Scholarship sponsored by Foss Maritime Co, is an honor student and senior at Monroe High School. She first discovered marine life on the Atlantic Coast as a little girl. Marine biology became her passion once she explored the beaches of Ocean Shores. She now volunteers at Seattle Aquarium and is an avid recreational SCUBA diver. Upon graduation she will enter the School of Aquatic and Fishery Science at the University of Washington to pursue a BS in marine biology.

Paul Hartl was awarded our $1,000 scholarship sponsored by Compass Courses Maritime Training and the $500 Pacific Maritime Magazine sponsored by RH Philips Publishing Group. Paul is an honor student at Cascade High School in Leavenworth Washington. He has always loved fishing on the ocean with his family but it wasn’t until he was invited aboard a Crowley tugboat in Neah Bay that he knew he wanted a career working on tugs. Paul will enter California Maritime Academy in the fall majoring in Marine Transportation.

Joseph LaMarche is a senior at the Bishop Blanchet in Seattle and grew up on a Lake Union house boat where his love of the water and sailing began. He is a sailing instructor the Seattle Yacht Club youth sailing program. He has also had to opportunity to work as a deckhand aboard sailboats for his family’s tourism business. He will attend California Maritime Academy in the fall majoring in Marine Transportation.

Shaun Huston from Chimacum PI Program in Port Townsend is the recipient of our $500 scholarship sponsored by Ocean Peace, Inc.  His love for building boats and sailing grew out of his participation in many of the community youth boating programs in the Port Townsend area.. He will attend the Northwest School of Wooden Boatbuilding with a focus on learning the many skills of a shipwright. Upon graduation from the 12 month program he hopes to crew aboard a large sailboat and see our West Coast.

Angela Ness from New Start High School is the recipient of our second $500 scholarship sponsored by John and Anita Crawford (retired from Foss Maritime Co). She first experienced the maritime world when her teacher invited her to sail about the Sloop Adventuress for 3 days. This opportunity changed her life and gave her direction for her future career. She was drawn to marine biology when she enrolled in the Environmental and Marine Science Program offered at the Puget Sound Skills Center. She is planning to study marine biology and journalism starting at a local community college and eventually enroll in the University of Washington. She hopes also to crew aboard a ship as a deckhand and eventually work a maritime journalist.

All six recipients have demonstrated strong leader skills and are model students with a passion for working on boats and on the ocean. Each student gave a talk in front of a panel of judges from the maritime community, our Scholarship Committee, teachers, and family members. Their presentations addressed “Charting a Maritime Career” and provided a window of the pathway to their future marine careers.