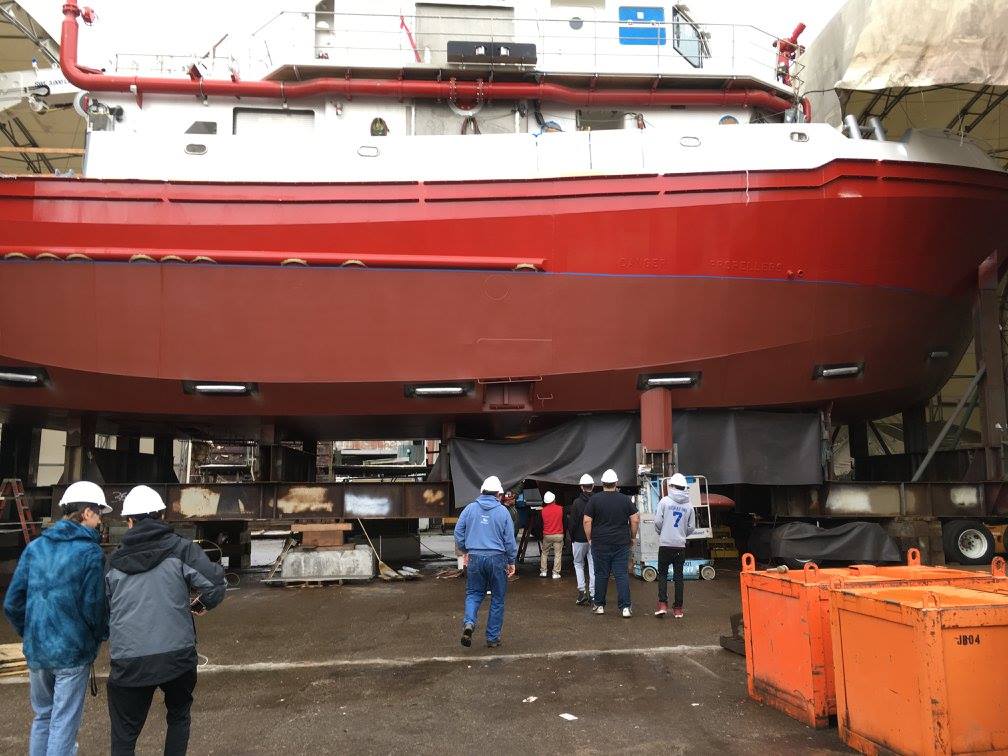 What is the Maritime Industry?

That was the opening question asked by Norm Manly, community volunteer and a 42-year veteran of the maritime industry to over 50 Manson High School students during presentations on November 30. Kevin Amsden, AG, Shop and Leadership teacher’s classroom was buzzing with nautical talk and students were exposed to many careers both on the water and shoreside in support of the vessels at sea. Presentations were designed to “open the eyes” of students to amazing and high paying jobs within the maritime industry. Mr. Manly told the girls in the class that every job he was going to talk about was available to them, his is no longer a “man’s world” at sea. The presentation was also designed to prepare students for a trip to Seattle December 2 where they would be immersed in maritime.

Six Manson students, Mr. Amsden, Norm Manly and driver Jorge Valencia met at the high school at 0700 hours (that’s 7:00 am for land lovers) and were soon underway for the west side.

First stop was Foss Maritime Company’s Shipyard, located in Ballard on the Ship Canal. We were met by Port Engineer Jack Mulvaney and Shipyard Safety Officer Ron Sykes. All were issued hard hats, safety glasses and Ron provided safety tips to observe while in the shipyard, which is number one at Foss – “Always Ready – Always Safe”.

We walked toward the Shipyard, it was hard not to notice a storage area filled with huge stainless steel propellers, much larger than any of the students had ever seen. The group turned right entering the yard and their eyes were filled with two giant barges used in the Red Dog Mine project above the Arctic Circle, the largest floating steam crane in the USA and the first “Tractor Tug” built in North America, Wedell Foss.

Next Ron and Jack brought the students to an area where Foss was building a fireboat for the Port of Long Beach. This vessel is 108 feet long and can shoot 41,000 gallons of water per minute through ten nozzles and named Vigilance. The project was nearing completion and soon the vessel would be launched. The yard crew were preparing the vessel, which sat on a steel platform, with wheels underneath….lots of wheels. When it is time to launch one of Foss’ drydocks will be moved against the Shipyard wall and the fireboat will be driven onto the drydock. The drydock will be taken to deep water, sank and the fireboat will float off. This was brand new information for the students and they loved it!

Students got a look at the Machine Shop, one of eight trades that work at Foss. Ron talked about the process of gaining experience and training to work in a shipyard and since the Foss Shipyard is a union shop that process as well. All positions in the shipyard are well-paying jobs with great benefits.

We ended our tour by going aboard the Stacey Foss, a 3,000 horsepower ocean going tug. The vessel had just returned from a long voyage and will undergo repairs soon. On the stern deck of the Stacey students learned how the tug hooked up for a tow, the double drum towing winch was impressive. Students went down a ladder into the engine room, stood between the two impressive 1,500 HP Electro-Motive Diesel (EMD) engines and learned from Chief Engineer Jack Mulvaney what it was like to work there. Back up the ladder they entered the galley and staterooms, where the crew spends time while not on watch. Then one more ladder to the wheelhouse where all the action takes place. Radios, radars, computers and more gadgets than one could imagine was stuffed into the little space. Students got a bird’s eye view of what it was like to run a tugboat.

We turned in our hard hats and were once again underway. I want to thank Port Engineer John Barrett for making this trip possible. Each student was given a Foss baseball hat and memories they will talk about when back home.

We drove past Fisherman’s Terminal, home of one of the largest fishing fleets in the country. We made a quick stop at the Ballard Locks before arriving at the Seattle Maritime Academy, located under the Ballard Bridge.

We were met by Deneva Flath, Seattle Maritime Academy’s Office Manager and Girl Friday who couldn’t wait to show off their new 20,000 square foot addition to the school. Deneva provided information about both programs, Deck and Engineering offered at the school, the cost of their programs and expectations. From there Sarah Scherer, Director Associate Dean at Seattle Central College and Port Captain Erik H. Davis led the tour through the many classrooms and shops where everything is the latest technology. Students learned something new and exciting with the opening of each door.

The highlight of the tour was the Seattle Maritime Academy’s full-bridge simulator which was funded by Foss Maritime Company and Washington State Ferries. Instructor Mark Pickette explained the purpose of the simulator and its capabilities. Students were given the opportunity to be captain and drive the boat around Seattle Harbor. Mark made it rain, increased sea conditions and even simulated darkness for night time navigation. It’s so real that you need to hold on while in the simulator even though nothing was moving!!!! People have actually become sea sick while using the simulator.

The tour ended with a visit to the school’s vessels at the dock. Students could see, feel, touch and smell what it was like aboard and could imagine what life would be like while at sea.

A trip into the Seattle maritime community wouldn’t be complete without lunch at Chinook’s at Ballard’s Fisherman’s Terminal. When lunch was over it was time to head home. The 3 ½ hour trip over the pass was uneventful, we were back at Manson High School at 2030 hours (8:30). It was a long day but according to the students, well-worth the drive.

I thank all my friends at Foss Maritime and the Seattle Maritime Academy for their efforts.