The Maritime Industry is a prosperous industry that thrives in Washington State and the greater Pacific Northwest region.

Please use the links on the following pages to start your research on the economic impacts of the industry and to get an idea of wages awaiting those interested in pursuing maritime careers.

“The Maritime Industry at a glance” As published in November of 2013 in the Seattle Times by Coral Garnick, is a great overview of some of the financial impacts of the industry to Washington State. 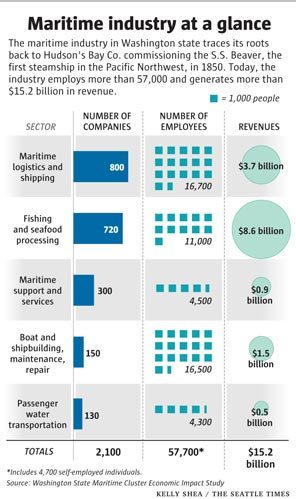 “As the second day of Seattle’s Pacific Marine Expo kicked off Thursday, the buzz among the attendees — fishermen and legislators alike — was a newly released economic report boasting of Washington’s $30 billion maritime industry.

In the state, a maritime industry that traces its roots back to Hudson’s Bay Co.’s commissioning of the S.S. Beaver, the first steamship in the Pacific Northwest, generates $15.2 billion in direct revenues and is responsible for 57,700 jobs.

Read the rest of the article here